Our trips “over town” — island-speak for going to the mainland — are rare, so we try to get as much done as we can. This past weekend was one of those trips. We went over for a party and concert, but crammed in a bunch of errands.

We started off by driving to a tile store on the south side of Seattle to choose wall tile for one of the bathrooms in the new house. Mission accomplished, we headed back up I-5 to Lynnwood, had lunch, and checked in to our motel. After a brief break, we headed to our first event: a birthday party at the Edmonds home of our friends Cliff and Heather. We went to college with Cliff, so we’ve known him a long time. 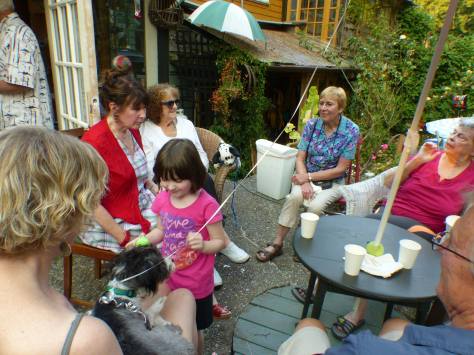 Cliff and Heather’s party, with their new dog Dougal and 5-year-old granddaughter Lulu in the foreground (photo by Cliff)

Cliff’s birthday is actually in November, but he decided he wanted to have an outdoor party, which would be difficult then, so he chose August. He also decided that the party would also be for any of his friends who had a birthday this year ending in 0. I don’t know who that would be.

We had a great time at the party and enjoyed meeting and chatting with Cliff and Heather’s other friends. We were especially entertained by Cliff’s 5-year-old granddaughter Lulu and new dog Dougal. Dougal seemed very attached to Lulu, but she insisted he was Grandpa’s dog.

After the party we headed back to the motel, where we decided to watch the Olympics. We’re cord-cutters and don’t watch much TV, so we hadn’t seen any of the Games. The coverage of track and field. one of my favorite sports, was pretty good, but the commercials were interminable. When NBC switched to a seemingly endless interview with the execrable Ryan Lochte, we turned it off.

The table we may buy. Just the table, not the chairs.

Sunday morning it was off to Costco to purchase mass quantities of paper goods and other supplies. Then we headed south again into downtown Seattle, where we went to a couple of furniture stores. We saw some interesting stuff and actually settled on a dining-room table, but we won’t order it yet because the house won’t be ready until spring.

We had a late lunch at Elliot’s Oyster House on the water and then headed back north to the University District for the final event of the weekend: a concert by Shawn Colvin and Steve Earle, who have a new record out.

The concert was in the Neptune Theater, a 1920’s movie theater that has been converted to a music venue. It’s relatively small but has some of ornate touches you expect from an old theater. They’re added a full bar at the back of the theater but retained the movie concession stand out front, complete with giant bags of popcorn and overpriced candy.

Shawn Colvin and Steve Earle on stage at the Neptune Theater

Colvin and Earle are somewhat different artists. She’s basically a folkie and he’s more of a country rocker, but they turned in a terrific performance. Their voices melded perfectly, and they produced amazing instrumental sound from just guitars and mandolins, with no back-up band.

The show was a mix of covers and original songs from the new album plus some of their individual hits. They opened with “Wake Up Little Susie,” an Everly Brothers song that’s so old it came out when I was in middle school. They also covered sings by Emmylou Harris and the Rolling Stones, as well as “Tobacco Road,” originally by the Nashville Teens, who are, as Shawn pointed out, a British band.

Other highlights included the anthem “Tell Moses,” with the audience singing along on the chorus (“the water is wide, milk and honey on the other side”),  and “Thinkin’ ‘Bout Burning the Walmart Down,” after which Steve Earle cried out “buy local.” They also did Shawn’s “Sunny Came Home” and “Diamond in the Rough” and Earle’s “Galway Girl” and “Copperhead Road.” It was one of the best shows we’ve seen.

After the concert, it was back up I-5 again to Mukilteo, where we caught the 11 o’clock ferry and escaped back to Whidbey.