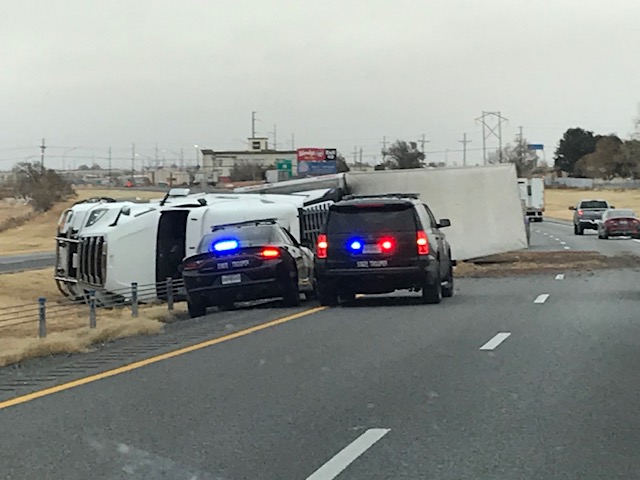 A jacknifed semi on I-40 somewhere in Oklahoma

After we left Santa Fe, we dropped down to I-40 and headed east. The forecast said cold weather was coming in, but we thought we could squeeze in one more night of camping, so we stopped at a KOA just east of Amarillo, Tex.

The afternoon and evening were pleasant enough, but the wind picked up and at 4 am we were both wide awake as the vinyl upper sides of the camper shook in the wind. Realizing we weren’t going to get any more sleep, we broke camp and got back on the highway, making our way through the dark, sleet, and freezing rain, mostly just us and the 18-wheelers.

Around 7 we decided to stop for breakfast and pulled off at a truck stop with a Denny’s somewhere west of Oklahoma City. We settled in and ordered a hot breakfast. Just as I went to the restroom, the power went out. Fortunately, I had a flashlight in my pocket, so I found my way back to our table and the lights came back on.

The lights went on and off several more times and then went off for good. We were about give up when the waitress said she did have some hot oatmeal, so we ate that and headed back onto the freeway.

We encountered three wrecked semis, one overturned, one jacknifed, and one just off the road. We finally got through Oklahoma City and decided to stop for lunch. Outside a McDonald’s, with my usual gracefulness, I slipped on some ice and fell. After that we made it without further incident to our motel in Van Buren, Ark., just outside Fort Smith.

My back still hurt from the fall, but we had survived another drive across Oklahoma. (Some of you may recall that a few years ago we drove across Oklahoma in a sleet storm with single-digit temperatures.) From Fort Smith, we headed on the Memphis, our last major stop.