The Great Wall, aswarm with tourists

Today we went to the Great Wall. It is as impressive up close as it is in the pictures. We went to the Badaling Hills section, which is quite close to Beijing.

Robin on the wall

We rode a cable car to the top. We didn’t stay long. Unfortunately the wall was as awash with tourists as Tiananmen Square. Although it is wide enough to accommodate four horses abreast, it was not wide enough to accommodate all the people who were there. There were also a lot of old steps and inclines that were hard to negotiate. We took some photos and returned to the cable car. I ended up feeling like those people who visit the Grand Canyon for an hour, snap a few photos, and go.

From where we were we could see other sections of the wall with few or no people. If we ever return to China, we will go to a less popular section farther from Beijing.

Phil on the wall with fellow tourists

It was also quite cool and windy. In fact, by the time we left, it was so windy that they were no longer taking people up in the cable cars.

We are learning that when you visit a country of 1.4 billion people in a land area about the size of the United States, it can be pretty crowded, especially in the cities, where half of China’s people now live. And it will only become more crowded as the migration to the cities continues. Depending on how you count, China has four or five of the world’s 10 largest cities and at least eight cities larger than New York.

Our first day in Beijing I thought that the traffic wasn’t any worse than other big cities, but now, after three days, I’ve decided it’s pretty bad. It seems to take at least an hour to get anywhere. To counteract this, the Chinese are making big investments in pubic transportation. Beijing already has the world’s second longest subway system and is planning to to nearly double its size in the next few years. The subway carries 10 million people a day and still the streets are choked with traffic. 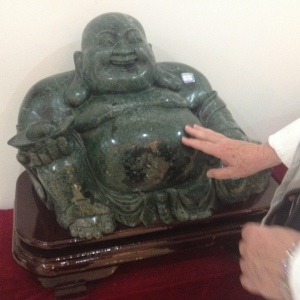 Rubbing the tummy of a jade Buddha

The other way China is trying to cut down on crowding is its one-child policy. Without the policy, Matthew said, China would have 400 million more people. The policy has been loosened a bit though. Now if one parent came from a one-child family, that couple is allowed to have two children. But there remain powerful disincentives, such as the cost of education, to having two children.

After leaving the wall, we had lunch on the second floor of a jade factory. We got a brief tour and an explanation of the different kinds of jade, not all of which is green, and saw how jade is carved. In addition to the factory and restaurant, there was a large showroom where one can buy many different items made of jade. Robin did not miss the opportunity.

The carved stone figures along the Sacred Way of the Ming Tombs are impressive, but they got this elephant wrong.

After lunch we headed for the Ming Tombs, where most but not all of the Ming emperors are buried. We walked along what is called the Sacred Way, which is lined with figures of people and animals carved from stone. It was a most pleasant postprandial activity. The weather was beautiful and there were few other tourists.

Today we also learned why Matthew is called Matthew. It seems that before he became a tour guide he was a tax collector, so when he decided to adopt an English name he named himself after the Disciple who had been a tax collector.

Robin and friend, on the Sacred Way of the Ming Tombs

This evening we went out for a dinner of Peking duck, or Beijing duck if you prefer. We have had Peking duck before. In fact, the first time was in the D.C. restaurant where Henry Kissinger went to learn about Chinese food before he went to China to meet with Mao. Still, we thought it would be worth eating Beijing duck in Beijing.

The restaurant was beautiful and the duck was excellent, carved at table side by a skilled chef. The chef is supposed to get at least 120 pieces of meet off a duck, but none of us were able to count. The traditional way to eat Peking duck is wrapped in a pancake with plum sauce and scallions. This restaurant did that but offered other vegetables and even fruit to go with the duck. It was delicious.

Tonight is our last in Beijing. Tomorrow we fly to Xi’an, home of the Terra Cotta Warriors.