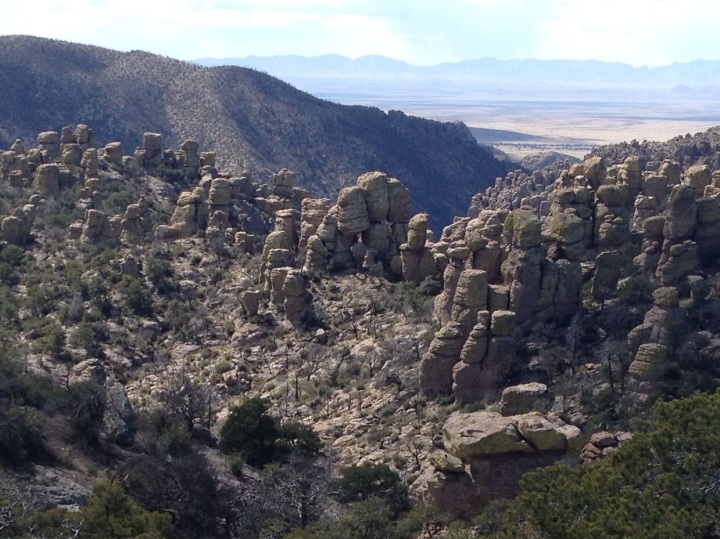 We made this trip’s one stop to commune with nature at the Chiricahua National Monument southeast of Tucson.

The monument is known for its towering rock formations, which have been eroded away to the point that they look like they should fall over. Many have been given names like China Boy and the Sea Captain.

A different kind of formation is Cochise Head, which is said to look like the famed Apache chief lying on his back:

The other feature of the monument is Faraway Ranch, so called because “it’s so darned far away from everything.”

The ranch began as a  two-room log cabin bought by Emma Peterson in 1886. She hired a carpenter named Niel Erickson to fix it up and ended up marrying him. They expanded it over the years into a cattle ranch and then also a guest ranch. Neil Erickson was the first ranger for the Coronado National Forest.

After the Ericksons died, their daughter Lillian continued to run the ranch into her 90s even though she ended up deaf and blind.

When the National Park Service took possession of the ranch in the 1970s, it received not only the buildings but also the contents of the house: furniture, dishes, books, papers, and so on. It makes for a fascinating tour.

After a night camped on the Colorado River, we are now in California, headed for some visits with family and then north toward home.

One thought on “Chiricahua National Monument: far away among the rocks”