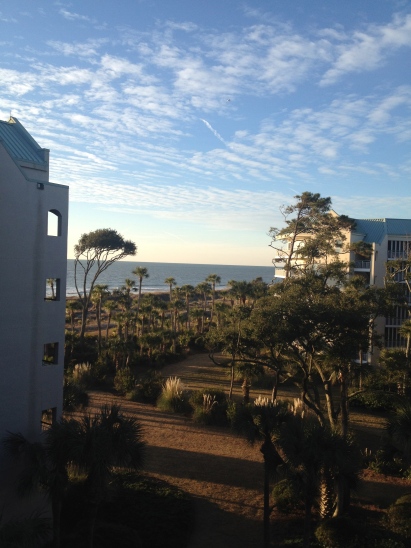 The view from our “villa” on Hilton Head

We live most of the year on an island, so when we are on the mainland for a long time, as we are in the winter, we often feel the need for an island fix. So we just spent a few days on Hilton Head in South Carolina.

Driving through the Carolinas is always entertaining. For one thing, you pass by towns like Dunn, N.C., which bills itself as “The Dump Truck Body Capital of America.”

Then there’s South Carolina, which names not only roads but interchanges after people. One is named after Ben Bernanke, the former Fed chairman who grew up in nearby Dillon. Then there’s the Juanita M. Smith Sidewalk, which crosses over the freeway. Maybe it’s just me, but naming a sidewalk after someone seems kind of pedestrian. (It appears that Ms. Smith wrote a book called Sidewalks, so maybe it’s OK.)

Hilton Head proved to be quite a bit different from Whidbey. Sure, it has the ocean and broad sandy beaches, and the seafood is good. We enjoyed strolling the beach and visiting Rose Hill Mansion, an ante-bellum home that’s not actually on the island but in nearby Bluffton.

But Hilton Head is Not Whidbey in several ways:

And Hilton Head has a toll road, part of that four-lane highway. That was a big surprise. You do have to pay a toll to ride the ferry to Whidbey, but once you’re on the island the roads are free.

Condos. Everywhere you look on Hilton Head there are condos. Walking along the beach, that’s most of what you see. They call them villas, but they’re condos. I was reminded of a Tom Paxton song: “Condos for sale, condos to buy, for Yuppies in the sky.”

Golf. This appeared to be the primary activity of a large portion of Hilton Head denizens. One night at dinner, the people at the next table spent almost the entire meal talking about golf. Hilton Head has 24 golf courses, with quite a few more just across the bridge on the mainland. Whidbey has golf courses, too, but only about half a dozen, and I suspect that the golfers are seriously outnumbered by the fisherpersons.

Gated communities. Hilton Head has a lot of these. In fact, we stayed in one, Palmetto Dunes, in a villa, of course. It was nice, but we discovered a downside. Some things we wanted to see were behind the gates. We tried to drive down to the ruins of Fort Walker, a Civil War site, but it was behind the gates.

Then we tried to go to the lighthouse, which is inside a development called Sea Pines. We got to the gate and the man said it would cost six dollars. That seemed odd, but we paid it and started to drive on when he came running after us and told us we couldn’t enter because we had our camper on the back of the truck. It seems anything that resembles an RV is banned from Sea Pines, even if you just want to visit the lighthouse. I guess it’s one way to keep the riffraff out. We got our six dollars back and went on our way, quite annoyed.

It seemed odd that landmarks like a fort and a lighthouse are privately controlled. In most places they are owned by some level of government. Maybe Hilton Head is sort of a Republican paradise, where everything is privately owned, government knows its place, and there are plenty of gates to keep the hoi polloi out.

There are many nice things about Hilton Head, and I’m sure many people like it there, but we decided, on reflection, that it’s just not our kind of island.