From Yellowstone we continued west into the Bitterroot section of eastern Montana, where Chief Joseph and the Nez Perce fought a losing battle against the U.S. Cavalry. 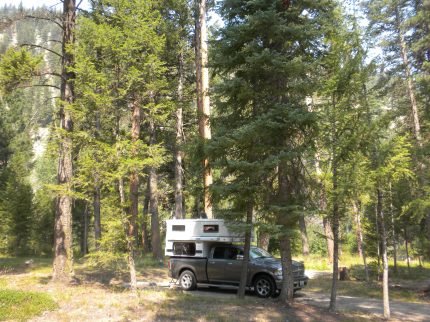 Our campsite in the BItterroot National Forest

We spent two nights in the Bitterroot National Forest, about 30 miles south of the town of Darby, on the West Fork of the Bitterroot River. This was real camping. No hook-ups, no wi-fi or cellular signal, no flush toilets, or showers. Just us and the natural world. In fact, the first day we had one whole end of the campground to ourselves. It’s a beautiful spot.

A short way from where we camped was the reason we came here (besides the peace and natural beauty): the Alta Historic Ranger Station. It’s a simple log cabin, built by two early forest rangers in 1899, and it is the oldest still-standing ranger station in America. The sign called it “the first Forest Service Ranger Station,” but in fact it predates the creation of the Forest Service.

One of the two men who built the ranger station was Robin’s great-grandfather, Henry Clay (Hank) Tuttle, who was a ranger, Indian Scout, and lawman. Robin first stopped and visited the cabin two years ago when she was driving out to camp on Whidbey. She and I stopped again later that summer on the our drive back to Maryland, but the cabin was wrapped in aluminum to protect it from forest fires in the area. This was our third visit. 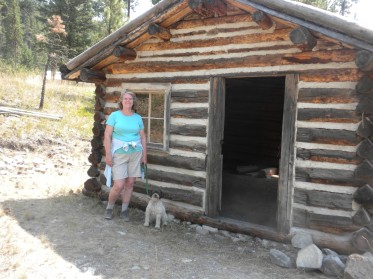 One of the challenges for the Forest Service is maintaining the cabin’s sod roof. They’ve tried various techniques and sometimes, as on Robin’s visit two years ago, it looks great. Other times, including this visit, the roof needs work.

After Alta, we stopped for two nights in Coeur d’Alene, Idaho, another gorgeous area. We drove around Lake Coeur d’Alene and stopped in a state park for a picnic.

Now we’re back on the island, where we’ll probably stay for the rest of the summer. One thing we discovered is that it’s mighty hot out there on the prairie. We like the island, where a day in the low 80’s is a real scorcher.

Final statistics on the trip: 3,323 miles driven, 69 hours and 12 minutes (2.9 days) of actual driving time, and an average speed of 48 miles an hour. License plates seen: 47 states (all but Delaware, Hawaii, and Rhode Island, plus D.C.) and six provinces (B.C., Alberta, Saskatchewan, Manitoba, Ontario, and Quebec).

2 thoughts on “The house that Hank built”