We have returned from an impromptu two-week trip to Rapid City, S.D., and back. As reported on Facebook, the primary purpose of the trip was to surprise the granddaughters, who were traveling with their Dad. They were suitably open-mouthed when we walked into the restaurant where they were waiting for a table. 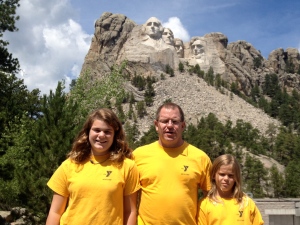 We spent two enjoyable days in the Black Hills, accompanying Tim, Sophia, and Annika to Mount Rushmore and Wind Cave National Park. We had been to Mount Rushmore before, and while the girls enjoyed it and it’s interesting to think about what a monumental feat it was to create, the patriotism is laid on a little thick for my taste. Wind Cave, on the other hand, was new to us and quite fascinating.

We visited Carlsbad Caverns two years ago, and its large rooms and many rock formations are awe-inspiring. Wind Cave is very different. It’s a much drier cave, with smaller rooms and narrower passages and without the stalactites and stalagmites that characterize Carlsbad and many other caverns. What makes Wind Cave unusual is a formation called boxwork, which looks a little like scaffolding put up by elves to climb around on the rocks. Wind Cave has most of the known boxwork in the world. The cave is the third largest in the United States (after Mammoth Cave in Kentucky and Jewel Cave, which is also in the Black Hills). What’s more, only about 5 percent of Wind Cave has been explored.

The other thing we saw a lot of in around Rapid City was motorcycles. We were there just a week before the big annual motorcycle rally in Sturgis, which draws several hundred thousand bikers. The area was already crawling (or should I say roaring) with bikes. I have since learned that so many people die during the Sturgis rally that people make bets on the final death toll. Given that most of the cyclists we saw couldn’t be bothered with helmets, that’s not a surprise.

Sturgis also has a campground and concert venue called the Buffalo Chip, which seems to feature a lot of aging rock bands. We saw billboards touting Lynyrd Skynyrd, Mötley Crüe, Alice Cooper, and Cheap Trick, as well as the egregious Ted Nugent. We did not partake.

Having driven all that way, we decided to make a couple of stops on the way back. So when Sophia and Annika headed east with their Dad to Mankato, Minn., to visit their other grandparents. We turned west, toward Yellowstone. I’ll cover that in my next post.