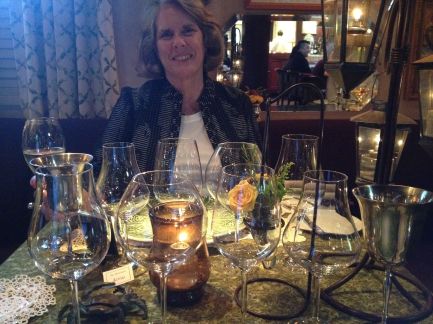 I said this wasn’t going to be a food blog, but we had a meal Saturday night that cannot pass unremarked. We celebrated Robin’s birthday with dinner at the Herbfarm in Woodinville, a town just northeast of Seattle that is home to scores of wineries.

I have eaten at a lot of high-end restaurants, including the much-lauded French Laundry in the Napa Valley, but none were like the Herbfarm, with one possible exception (more on that below).

The Herbfarm was started by a retired couple who grew herbs and gave the extras away to friends. Then they started selling the herbs, adding cooking classes, and ultimately a restaurant. The original restaurant burned down, and it moved to the current location, on the grounds of the Willows Lodge, on 2001.

The whole thing is quite a production. If you get there early, you can visit the wine cellar, which has 26,000 bottles and 4,500 different wines. It is said to be the most extensive collection of Washington and Oregon wines in the world. They also have some wines from elsewhere, including that large wine-producing state to the south.

After the wine cellar, you get a tour of the herb garden. You can sample some of the herbs that will be used in that night’s dinner. You also get introduced to the recycling system, two pot-bellied pigs named Basil and Borage.

Then it’s time to eat. The Herbfarm is part of the slow-food, farm-to-table movement. All the food comes from the Pacific Northwest, even the salt. They do different “themes” throughout the year. Our dinner was part of the “Chambers of the Sea” theme, which was pretty much all seafood. There are nine courses, paired with six wines. 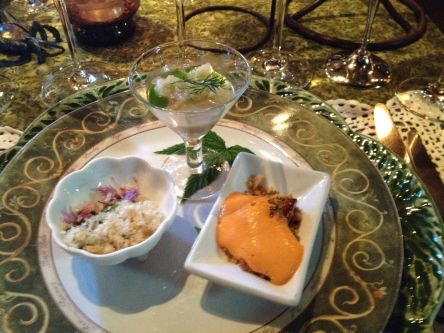 We started off with a first course of shellfish, a scallop, an oyster, and clams, each prepared differently (pictured). I won’t try to describe exactly how they were done, but suffice it to see that this was not your Red Lobster seafood platter.

The first course is followed by an introduction to the restaurant, the dishes, the wines, and the staff. After that the food resumes and keeps on coming, for upwards of four hours: tuna, halibut, prawns, salmon, caviar, cheese, dessert, all prepared in wildly innovative ways, with plenty of herbs, of course. The portions are small, so you don’t get over-full, but the ever-changing progression of wines can be a little overwhelming.

It’s a dining experience unlike any other I have had except one: the Inn at Langley, right here on Whidbey Island. It too has multiple courses (13, in fact) and wines (5), a pre-dinner talk by the chef, and its own herb garden. All the ingredients are from the Northwest and most of them from the island. No pot-bellied pigs though.

These are once-in-a-lifetime dining experiences, at least for us. Both of these restaurants cost a pretty penny, quite a few pretty pennies, in fact. We were able to eat there thanks in part to gift certificates given to us by folks at The Chronicle when I retired, for which we are most appreciative.

2 thoughts on “A tale of herbs, fish, and pot-bellied pigs”