We spent today wandering around Tupelo, Miss., probably best known as the birthplace of Elvis Presley.

We visited the house where he was born, a two-room, 450-square-foot bungalow that his father built. The “tour” took about 15 minutes.

They’ve built a museum and conference center next door that dwarfs the house. There’s also a church. The best part was remembrances of Elvis as a grade schooler that are posted on some of the walls. 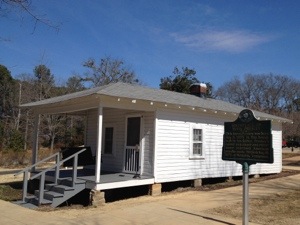 Then we drove over to the Natchez Trace Parkway visitors’ center and went to one section of the original trail where 13 unknown Confederate soldiers are buried.

Most interesting to me was that the saving of the trace and creation of the parkway were the result of a1905 magazine article. That has to be one of the most influential magazine articles ever written.

Nowadays I guess someone would just blog about it.

2 thoughts on “A native trail and the boy from Tupelo”